I had someone run a new project by me the other day. This is a kids product and they had made some inquiries with US manufacturers before coming to me. In their email they wrote: “The truth of the matter is that we just can’t get some of these materials in the U.S. The companies I’ve contacted here either don’t have the production capacity for what I consider a small first run (5,000 sets),or prices are sky high even with a bulk order?! Or they’re totally unwilling to white label or co-brand with a startup.”

So all the stories you read nowadays about manufacturing coming back to the US from China, well obviously you have to take those stories with a grain of salt. The US is still a very expensive place to make any kind of consumer product. Just out of curiosity I looked up to see what the average manufacturing wage is between China and the US. The US Govt Bureau of Labor Statistics (BLS) keeps theses figures and is as good a source as any for this information. So that is where I went. According to the BLS, in 2012 the average hourly wage for a worker in the manufacturing industry in the US was $ 35,67. In Japan it was $ 35.34. Just to give you an idea of how expensive labor is in industrialized countries. But in fact, in some European countries e.g. Norway, Switzerland, the average hourly manufacturing wage approaches $ 70.00 per hour.

Probably because of doubts about validity of data and methodology China was not included in the primary BLS table of 33 countries. But there was a separate table for China in which the BLS estimates that China’s average manufacturing wage in 2012 was $ 1.74. Compare that to Taiwan where the average hourly wage in manufacturing in 2012 was $9,46 or in the Philippines where it was $ 2.10 per hour. In other words, China is still the cheapest place to manufacture. And by a lot.

Moral of the story, if you are making any kind of consumer product in any sizeable QTYs, you can certainly to look into doing some aspect of it domestically, maybe packaging, but your best bet for the bulk of your production is still China. And for many years to come.

I had a call a few weeks ago from a woman who runs a small home décor company here in the US. She has built her business sourcing in India and I guess has had some measure of success judging from what she told me about her business and her list of retail customers. But now she is growing weary of India. I asked her why and she replied that Indian vendors are raising prices all the time and have become difficult to deal with. I asked her why she expects things to be different in China, adding that she really should not expect a whole lot of difference between India and China, for both places present their own challenges when it comes to sourcing. She replied that she knows China is a difficult place to do business but that she wanted nevertheless to leave India and start sourcing in China. I really could not say much to that but my thinking has always been that if you have built your business with one vendor it is probably a good idea to stick with that vendor as long as you are still turning a profit. Only when things really start turning south should you start looking for another supplier. Similarly, if you have done well over the years in India my advice would be to stay in India and maybe just make some brief forays into China.

After telling me about her business the woman told me that she wanted to attend the Canton Fair this spring which at the time she called was only a few weeks away. That is not, I thought to myself, how one attends an international trade fair. I explained to her that attending the Canton Fair usually involves a few months of preparations e.g. emailing vendors you want to visit, ordering samples, scheduling visits not to mention flights and hotel reservations. If you do not do all that you are really just wasting your time and money because the fair is just too massive to go unprepared. And there are just so many bad vendors that an initial screening of vendors is really necessary.

Anyway, the call concluded and I did not hear from her again. Not even a note after I sent her a follow up email. For some reason people don’t like it when I discourage them. But as I see it if I don’t tell it like it is then I am not giving good advice. 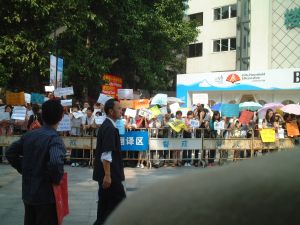 Someone was asking me this week about doing retail display packaging in China. They simply wanted to know if most vendors were set up to do packaging in addition to product. My answer was yes. Most vendors have a local print mill they call on when they need to do retail display inserts and packaging for their customers. Packaging is never a problem so you should always feel confident when you hand over your packaging specs to your vendor. As long as your specs are complete the vendor will have no problem delivering quality display packaging to you. Remember China makes over 60% of the world’s consumer goods across many industries. And that includes packaging. They know what they are doing.

Anyway this question got me to thinking about, printing in China. In fact, printing in China is very good nowadays. There are over 100,000 printing companies in China, as compared with about 65,000 in the US. And although there are probably quite a few dilapidated state run printing enterprises using out of date equipment among these, a great many other printing companies have state of the art printing equipment from Germany and Japan. A case in point is a printing company I visited in Guangzhou a few years ago. All the equipment in the factory was from Germany, including a state of the art half a million dollar dye-cutting machine.

China’s big labor force is also an advantage as people can be trained to specialize in one area of printing meaning the quality of each section of a printing project is necessarily high. In fact China has about 20 national universities just dedicated to the graphic arts. Needless to say with this combination of skill and low cost, printing in China is an option that many overseas publishers and printing companies look at nowadays. If you have a high-end printing project e.g. a limited edition with a hand stitched leather binding, for example, China is one option you will consider. I have seen deluxe limited edition art books that retail in the US for $600.00- $900.00 which were printed, you guessed it, in China.

Finally I will add that whenever I am in China I usually pick up a few books at the local bookstore where I am staying.. The printing and paper in books you find in China nowadays is extraordinary and in sharp contrast to the almost tissue like paper that books were printed on some 25 years ago in China. In those days the cost was cheap but that cost was every bit reflected in the quality. Nowadays cost is still pretty low but the quality is very high. But what would you expect from the country where printing was invented !